Like most command-line habitués, I’ve been using SSH and it’s buddies (scp, rsync, svn+ssh, sftp, vpn, tunneling), since around the time I wrote my first #include “stdio.h” main(){printf(“hello world\n”);} , and just got used to typing in username/password pairs every time I had to log in. Of course as with email, e-commerce sites, forums, and everything else on the wonderful intrawebs, I was schooled from an early stage to prioritize security (i.e.; not using my first name as the user and my dog’s name as the pass on all my accounts). This makes frequent log-ins on a dozen or so accounts considerably more enjoyable..

With a few recent projects the need to frequently login on many machines, and create automated tasks requiring user-less logins (backups,etc,..) got me looking into public/private keys and other methods. I had heard that there were all kinds of slick tricks that could be done with SSH, including baking cakes and putting satellites into orbit, but my intention was to achieve some level of convenience/security without reading a treatise the length of Crime and Punishment.

Without dissecting the full mechanism of encrypted communication let it be said that public/private keys are similar to physical locks and keys; once a lock is made, it is possible for an unauthorized entity to pick it, but it is relatively very difficult (depending on encryption type and key length). The “public” key is like a physical lock, and the “private” key like the physical key that is used to open it, through a challenge/response protocol. So it is relatively ok for many others (public) to know about the lock but we probably want to keep the key to ourselves. In order to use the lock/key pair we install a public key on the server we want to log in to, and keep the private key on our client. If we have more than one of these for logging into many machines it becomes a “keychain” in effect. Nuts & bolts for creating/storing/installing the key pairs:

There are clever and useful ways to automagically send the public key over to the server account (such as ssh-copy-id) but you can also just log in to it, open up its $HOME/.ssh/authorized_keys file and carefully append the shiny new public key (which is really the lock). It is a good idea to make a backup copy of the file and/or be careful when editing it because it may already contain other keys, and changing them will render their respective key-authenticated logins broken. Here is a sample authorized_keys file:

It is a good idea to set restrictive permissions on at least the private key and authorized_keys files, such as 0600. It may also be a good idea to change keypairs every now and then. ssh-keygen itself has many other options for managing the keys.

And Voila.. Log out of the server account and next time you log in from the client the server should prompt you for the password you used when the key-pair was generated (or not if none was used). The password-less part is especially useful for automated tasks but bad if someone gets a hold of the private key. So in general we want to keep using passwords, and all we’ve done with this whole key business is add another component to authentication making it a bit more secure. What a waste of time. But wait,.. ..Ladies & Gentlemen. In this corner, weighing in at 256 lbs, with 1024 victories, NaN defeats, hailing from inode 0xBADC0FFEE0DDF00D, block 0xdeadbeef, it’s,… S.S.H. Aagent!!… (cheers and applause) <ding>

Now as long as the agent is running and the registered identity is not deleted (which can be done), I can log in to the server with no password.. 😀

I have yet to investigate whether this will fail, but see no reason why identities for automated processes couldn’t also be registered once and remain usable as long as the same agent is running. Passwords would need to be re-entered if the machine is rebooted / ssh-agent killed / etc,.. 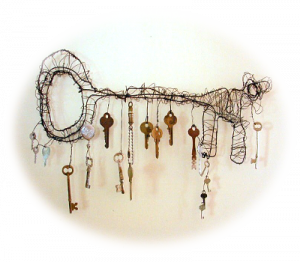 There are many additional tools for managing ssh-agent and the “keychain” for logging into multiple accounts. They vary in degree of complexity and sophistication and include GUI apps, systems for managing large numbers of users across multiple networks and such, but I won’t go into them here.

As you can imagine, even with keys and ssh-agent, it can be a chore to keep track of all the keys, usernames, ip addresses/hostnames across all the client and server systems. Luckily SSH can use both a system-wide configuration file, and a per-user config to address this.

Yes, there are a ton of options. Many of them quite useful.. The ones shown in my copy & paste from the man page above are what I focused on for my purposes for now. Given a .ssh/config file like:

..I don’t have to keep track of all the hostnames/usernames/keys for all the accounts. Instead I can log-in with a simple “ssh daedalus”. Of course it is possible to use the same key for all the accounts. ssh will still prompt for the key passphrase every time if one was given, but that can be remedied with ssh-agent and ssh-add.

Finally a sample bit of scriptactic sugar to tie it all together (there are other apps/tools to address this such as this and this):

2 Responses to ssh-keygen, ssh-agent, ssh_config, and their password-less buddies